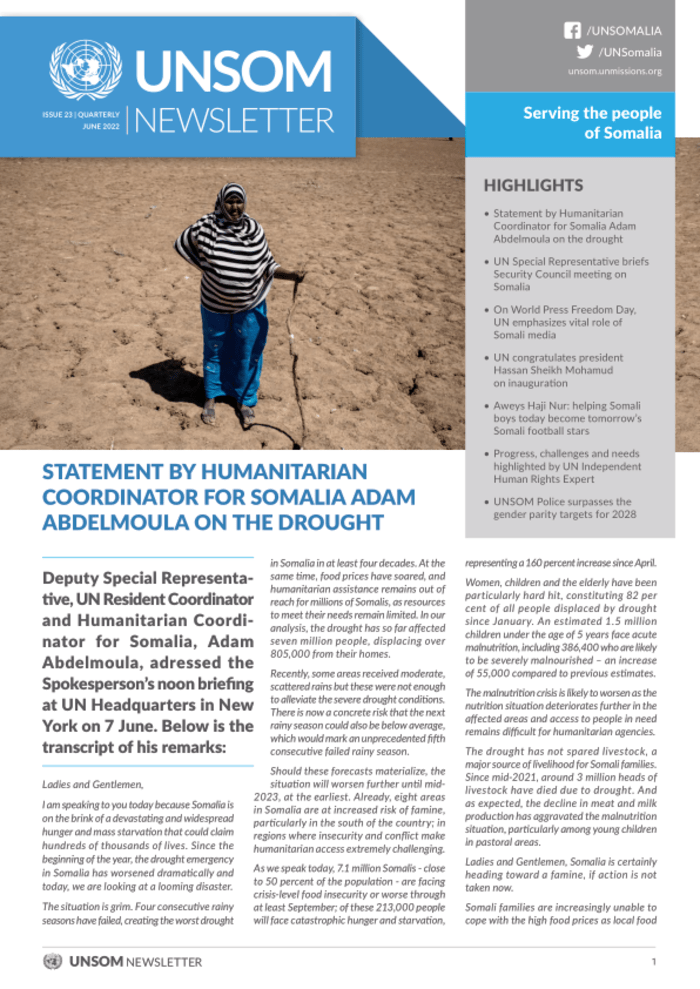 STATEMENT BY HUMANITARIAN COORDINATOR FOR SOMALIA ADAM ABDELMOULA ON DROUGHT

Deputy Special Representative, United Nations Resident Coordinator and Humanitarian Coordinator for Somalia, Adam Abdelmoula, addressed the Spokesperson’s Briefing at noon at the United Nations Headquarters in New York on 7 June. Below is the transcript of his remarks:

Ladies and gentlemen, I speak to you today because Somalia is on the brink of a devastating, widespread famine that could claim hundreds of thousands of lives. Since the beginning of the year, the drought emergency in Somalia has escalated considerably and today we are witnessing an impending disaster.

The situation is grim. Four consecutive rainy seasons have failed, creating Somalia’s worst drought in at least four decades. At the same time, food prices have soared and humanitarian assistance remains out of reach for millions of Somalis, as resources to meet their needs remain limited. According to our analysis, the drought has so far affected seven million people, displacing more than 805,000 from their homes.

Recently, some areas received moderate and scattered rains, but these were not enough to alleviate the severe drought conditions. There is now a concrete risk that the next rainy season will also be below average, which would mark an unprecedented fifth consecutive rainy season.

If these forecasts materialize, the situation will worsen further until mid-2023, at the earliest. Already, eight regions of Somalia are at heightened risk of famine, particularly in the south of the country; in regions where insecurity and conflict make humanitarian access extremely difficult.

As we speak today, 7.1 million Somalis – nearly 50% of the population – face critical or worse food insecurity through at least September; of those 213,000 people will face catastrophic hunger and starvation, a 160% increase since April.

Women, children and the elderly have been particularly affected, constituting 82% of all those displaced by the drought since January. An estimated 1.5 million children under 5 face acute malnutrition, including 386,400 at risk of severe malnutrition, an increase of 55,000 from previous estimates.

The malnutrition crisis is likely to worsen as the nutritional situation deteriorates further in the affected areas and access to people in need remains difficult for humanitarian agencies.

The drought has not spared livestock, the main source of income for Somali families. Since mid-2021, about 3 million head of cattle have died due to drought. And as expected, the decline in meat and milk production has worsened the situation of malnutrition, especially among young children in pastoral areas.

Ladies and gentlemen, Somalia is certainly heading for famine if action is not taken now.

Somali families are increasingly unable to afford high food prices as local food has become scarce. In addition, imported food prices have also reached record highs, in part due to supply chain impacts from the crisis in Ukraine. In parts of the country, food prices have risen by 140-160%, leaving poor families hungry and destitute.

It is not too late to avert impending starvation; lives and livelihoods can still be saved. But we must act immediately.

At the same time, the drought has caused a health emergency, as epidemics continue to rise. Since January, more than 4,880 suspected cases of acute watery diarrhoea/cholera have been reported, half of them in children under 2 years old. At least 8,700 suspected measles cases (82% children under 5) have also been reported.

We know that severely malnourished children are nine times more likely to die from diseases such as acute watery diarrhoea/cholera and measles. The latest data shows that death rates are reaching high levels in some areas, particularly in southern and central Somalia – and this indicates that loss of life is already occurring. We hear on the ground that people are losing loved ones, especially children and the elderly.

It is painful that drought is devastating the lives and livelihoods of people whose coping capacities, livelihoods and assets were already

Therefore, while humanitarians focus on saving lives and preventing famine, the international community must also invest in sustainable livelihoods, resilience, infrastructure development, climate adaptation and durable solutions to ensure that people affected by crises can survive in the future.

Ladies and Gentlemen, it is not too late to avert impending starvation; lives and livelihoods can still be saved. But we must act immediately.

Using available resources, humanitarian agencies assisted 2.8 million people between January and April 2022 with life-saving assistance and livelihoods through drought relief and famine prevention programmes. I thank donors and partners for their contributions so far.

The humanitarian community and national and local authorities have stepped up their activities, reorienting responses towards famine prevention and targeting the most vulnerable people in the areas most in need. These interventions by humanitarian partners have so far avoided the worst results but cannot cope with the increased needs. The available resources are terribly low. Our humanitarian response plan for 2022 is only 18% funded.

The reality is simply that the scale of assistance currently provided and funding from the international community is not sufficient to support those most at risk. Partners have turned to famine prevention activities but are only directing limited resources to people and areas where the needs are greatest, focusing on saving the lives most at risk.

Ladies and gentlemen, join me in beating the drum so the world can understand the seriousness of the crisis in Somalia. I call on the international community to act quickly while we still have hope of preventing widespread starvation and death. With additional resources, we can reach many more people. Without additional resources, more people will die.

I call on the international community to act quickly while we still have hope of preventing widespread starvation and death.

We cannot wait for an official declaration of famine to act on a large scale – by then it will be too late. We have been there before; in 2011, a severe drought led to a famine that killed a quarter of a million people, in part because we were slow to act. We must not allow this to happen again.

Today, hundreds of thousands of lives are again in danger. I particularly urge donors and partners to urgently provide pledges and rapidly scale up assistance to the Somali people. We must act now to avert a humanitarian catastrophe.