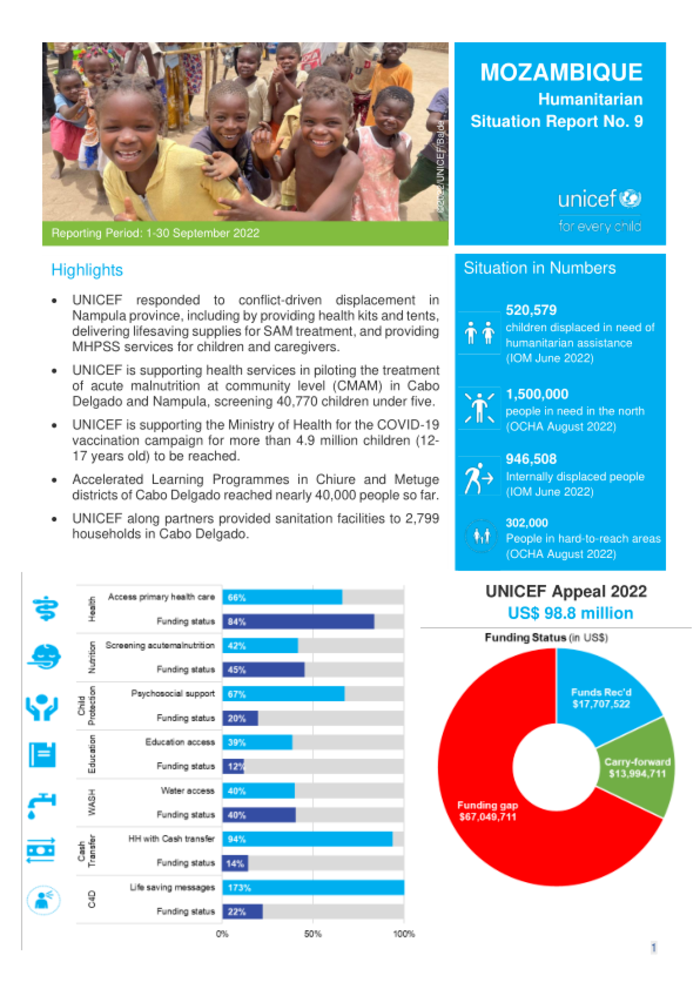 Overview of Funding and Partnerships

UNICEF’s 2022 Humanitarian Action for Children (HAC) Appeal seeks $98.8 million to maintain and expand the delivery of life-saving services to women and children in Mozambique affected by conflict, the Cyclone Gombe and Tropical Storm Ana. UNICEF received over $16.1 million in 2022, including generous contributions from the GAVI Vaccine Alliance, in support of UNICEF Mozambique’s humanitarian response to COVID-19, from the United Kingdom , the Central Emergency Response Fund (CERF), the United States Agency for International Development (USAID) and the Republic of Korea, which supported UNICEF’s response to the storms Ana and Gombe Tropical Islands, and the World Bank, the Directorate-General for European Civil Protection and Humanitarian Aid Operations (ECHO) and the governments of Italy, Norway and USAID who provided support for UNICEF activities related to the conflict in northern Mozambique. The 2022 HAC has a funding gap of 69%. UNICEF also used core resources and response-related funding totaling $11.7 million to meet urgent humanitarian needs and additional resources earmarked for the polio response. The remaining funding gap means that UNICEF is not able to meet existing needs and it is not possible to plan for displacement and upcoming storms; especially in hard to reach areas.

Overview of the situation and humanitarian needs

Armed violence triggered new waves of displacement in northern Mozambique in September. The beginning of the reporting period saw the spread of attacks by Non-State Armed Groups (NSAGs) in Nampula Province, causing new displacements and growing needs in Erati and Memba districts. Following the attacks, reports indicated that a total of 47,000 people (8,020 families) and 18,500 people (3,700 families) were displaced in Erati and Memba districts, respectively. Displaced populations remained mainly in host communities, although some began to return to their places of origin at the end of the reporting period, once the attacks subsided.

In Cabo Delgado province, attacks and clashes were also reported in several districts in September, including Nangade, Muidumbe, Macomia, Quissanga, Metuge and Chiure. These incidents and the fear of attacks have triggered continued localized displacements in several areas. Between August 31 and October 3, 2022, a total of 32,936 people were reportedly on the move in Cabo Delgado, the majority of whom were children. This figure also reflects significant return movements to the district of Mocímboa da Praia, with reports of thousands of new arrivals per week.

Meanwhile, outbreaks also remained a concern. The poliovirus epidemic is also still active in the country. Currently, there are 7 cases of wild poliomyelitis (WPV1) in Mozambique, all from Tete province. Additionally, there were 5 cases of circulating vaccine-derived poliovirus type 2 (CDVP2) and 8 cases of CDVP1 in 2022.