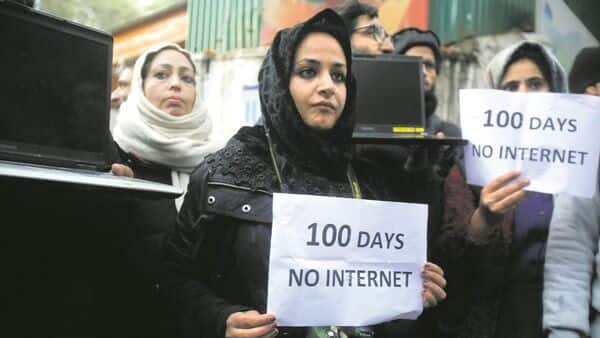 The cost of internet shutdowns in India, in charts

For the fourth consecutive year, India recorded the highest number of internet shutdowns in the world in 2021, according to data released last week by technology policy think tank Access Now. As many as 106 of the world’s 182 recorded internet crackdowns have taken place in India. It was another year where people in Jammu and Kashmir (J&K) were subjected to intermittent internet blackouts, even though the longest shutdown ever had already been lifted in February 2021. Each shutdown comes with high costs: its benefits are unclear, and rather, research suggests they may be counterproductive. Will local authorities see otherwise?

Between 2016 and 2021, internet services faced variable restrictions in at least 567 cases in India, more than half of the 931 such incidents recorded globally. Pakistan is ranked second, with 40. The actual numbers may be much higher than the recorded ones, the report notes.

Access Now defines an Internet shutdown as an intentional interruption, rendering the Internet or electronic communications inaccessible or effectively unusable for at least one hour. Authorities in many countries impose such closures to suppress dissent, silence critics and control the flow of information during elections, Access Now said. The global tally had dropped in 2020 due to the pandemic, but rose again in 2021.

A parliamentary panel said in December 2021 that only J&K, Delhi, Kerala and Bihar had submitted written records of internet shutdowns in 2020 and 2021. It also expressed dissatisfaction with the Centre’s lack of knowledge about whether the standard operating procedures were followed while enforcing such shutdowns. “The suspension rules have been grossly misused, resulting in huge economic losses and also causing untold suffering to the public, as well as serious reputational damage to the country,” the committee said.

J&K has borne the brunt of India’s internet outages since this data became available. Also in 2021, of the 106 closures, 85 were imposed on J&K. This figure is lower than the 93 closures recorded in 2020 but higher than the 81 recorded in 2019. Pulwama, Srinagar and Kulgam were the worst affected districts in 2021, with services interrupted more than 30 times.

The government says most of these closures were ordered for counter-terrorism measures, to quell unrest and keep anti-national elements at bay. Experts think otherwise. “An internet shutdown cannot be justified in any situation as it has a disproportionate impact on fundamental rights,” said Namrata Maheshwari, Asia Pacific Policy Counsel at Access Now. In January 2020, the Supreme Court declared Internet access a fundamental right. “There is no evidence to suggest internet shutdowns are effective,” she said.

India’s longest ever broadband internet blockade finally ended in February 2021 after 4G data services were restored on J&K after 550 days. Services had been interrupted since the repeal of Section 370 in August 2019 and were only being restored in a phased manner. It was also the third longest shutdown in the world to be lifted in 2021, the others coming from Pakistan (2,026 days) and Myanmar (593 days). However, there was little respite, especially for residents of the Kashmir Valley, as high-speed internet outages continued intermittently throughout the year.

Blockages have also been recorded in the National Capital Region and parts of Haryana during protests by farmers against a set of controversial laws that have since been repealed. In one incident, broadband and mobile internet were suspended for eight days in 16 districts of Haryana in February 2021, which also became the second longest shutdown in India last year.

Internet shutdowns have serious economic and social consequences. They cost India $583 million in 2021 alone, estimates Top10VPN, a global research and digital privacy group. The research, based on a 2016 Brookings study, used indicators such as the internet economy’s share of GDP, mobile subscription coverage and use of free services such as Google and Facebook. The Brookings study estimated that India lost about $968 million due to shutdowns between July 2015 and June 2016.

The long internet shutdown at J&K coincided with the first wave of covid-19, affecting access to healthcare and education. Quarantined patients apparently couldn’t get in touch with families, contact tracing efforts were hampered and doctors struggled to communicate. Online classes were difficult due to reduced bandwidth.

J&K had lost around $420 million between 2012 and 2017 as a result of these crackdowns, according to a study by the Indian Council for Research on International Economic Relations. This has significantly harmed tourism and e-commerce.

Although there is little evidence to prove that internet shutdowns serve the intended purposes of restoring peace, stopping disinformation and combating terrorism, studies have shown that they often have the opposite effects. . A 2019 working paper by Jan Rydzak observed that communication breakdowns after violent unrest only reinforce it, not suppress it. He also noted that rumors and misinformation continue with or without access to digital communication networks.

The United Nations Human Rights Office has also observed that in situations of conflict and unrest, internet disruptions “exacerbate the risks of further violence and insecurity.” The South Asia Terrorism Portal recorded a spike in terrorism-related incidents at J&K in the two years after the repeal of Section 370.

“In any crisis, people need to communicate and exchange information,” Maheshwari said. “When they’re cut off from the internet, which is one of the main tools that allows them to do this, it’s only going to cause more unrest.”

* Thank you for subscribing to our newsletter.

Vaccine equity in conflict-affected areas: the challenges of development, production, supply and distribution, May 2022 – World