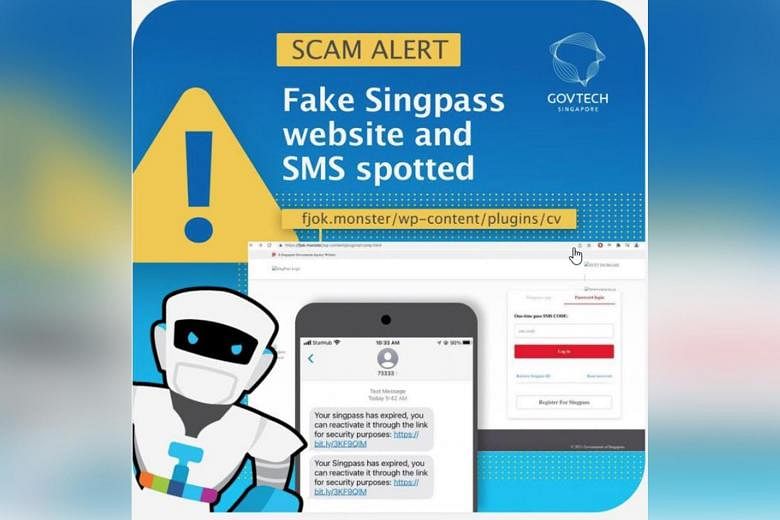 Text message telling users that Singpass account needs to be reactivated is a scam: GovTech

SINGAPORE – A new scam has emerged in which victims receive a message claiming that their Singpass account has expired and needs to be reactivated.

In a Facebook post Monday, March 14, the Singapore Government Technology Agency (GovTech) said it was aware of the scam, warning users that the post contains a link to a fake website where users are invited to provide their Singpass ID, password and two-factor authentication (2FA) details.

Singpass is used to access government online services, such as applying for social housing, and can also be used to digitally sign legal documents.

On Wednesday, police confirmed that a report had been filed. The fake website was also blocked, GovTech said.

He added: “We urge all Singpass users to remain vigilant when transacting online (and to) always verify the website domain when accessing any service.”

Noting that Singpass does not send text messages with hyperlinks, GovTech reminded users to avoid clicking on unverified links from unknown senders.

GovTech said, “If you are unsure of the legitimacy of a message, check directly with the official agency and organization.”

They asked victims to scan a Singpass QR code with their Singpass app. The victims were informed that they had to do so to retrieve the results of their investigation so that a reward could be paid.

However, the Singpass QR code was a screenshot taken from a legitimate website, and by scanning the QR code and authorizing transactions without further verification, victims could give scammers access to online services. .

Those who believe they have been victims of phishing sites can take these steps immediately: Reset your Singpass password on this website and check your Singpass transaction history for suspicious activity.

LOST ITEMS ON THE INTERNET