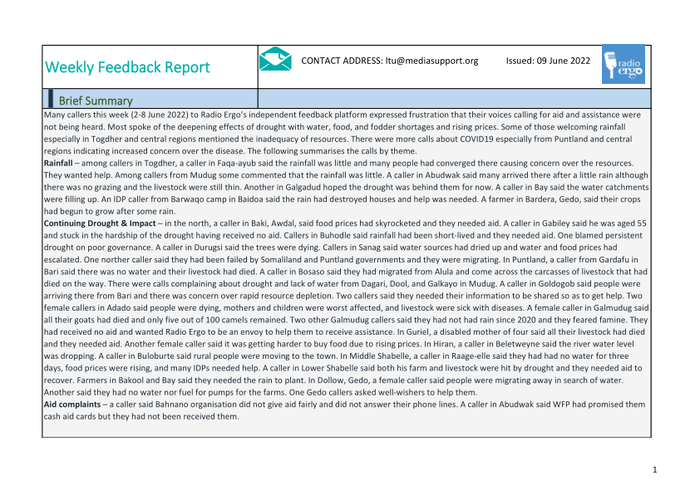 **Brief Summary Many callers this week (June 2-8, 2022) to Radio Ergo’s independent feedback platform expressed frustration that their voices calling for help and assistance were not being heard. Most spoke of the worsening effects of the drought with water, food and fodder shortages and rising prices. Some of those welcoming the rainfall, especially in Togdher and central regions, mentioned the lack of resources. There have been more calls regarding COVID19, especially from Puntland and central regions, indicating heightened concern over the disease. Here is a summary of the calls by theme.
precipitation – Among callers in Togdher, a caller in Faqa-ayub said there was little rain and many people had converged there, raising concerns about resources. They wanted help. Among the Mudug callers, some said it was light rain. A caller in Abudwak said many had arrived there after some rain, although there was no pasture and livestock were still scanty. Another in Galgadud hoped the drought was behind them for now. A caller in Bay said the watersheds were filling up. A caller displaced from Barwaqo camp in Baidoa said the rain had destroyed houses and help was needed. A Bardera farmer, Gedo, said their crops started growing after some rains.

Persistent drought and impact – In the north, a caller in Baki, Awdal, said food prices had skyrocketed and they needed help. A caller in Gabiley said he was 55 and stuck in drought hardships having received no help. Callers in Buhodle said the rainfall was short-lived and they needed help. One attributed the persistent drought to poor governance. A caller in Durugsi said the trees were dying. Callers in Sanag said water sources had dried up and water and food prices had risen. A caller from the north said they had been abandoned by the Somaliland and Puntland governments and were emigrating. In Puntland, a Gardafu caller in Bari said there was no water and their cattle had died. A caller in Bosaso said they had migrated from Alula and came across the carcasses of cattle that had died on the way. There were calls complaining about drought and lack of water from Dagari, Dool and Galkayo to Mudug. A caller in Goldogob said people were arriving from Bari and there were concerns about rapidly depleting resources. Two callers said they needed their information shared in order to get help. Two women calling in Adado said people were dying, mothers and children were the worst affected and livestock were suffering from disease. A woman calling in Galmudug said all their goats had died and only five out of 100 camels were left. Two other callers from Galmudug said they had not had rain since 2020 and they feared starvation. They had received no help and wanted Radio Ergo to be an emissary to help them receive help. In Guriel, a disabled mother of four said all her livestock had died and she needed help. Another woman said it was becoming increasingly difficult to buy food due to rising prices. In Hiran, a caller from Beletweyne said the water level in the river was dropping. A caller in Buloburte said rural people were moving into town. In Middle Shabelle, a caller in Raage-elle said they had been without water for three days, food prices were rising and many displaced people needed help. A caller from Lower Shabelle said his farm and livestock had been hit by the drought and needed help to recover. Farmers in Bakool and Bay said they needed rain to plant. In Dollow, Gedo, a woman caller said people were migrating in search of water. Another said they had no water or fuel for the farm pumps. One of Gedo’s callers asked supporters to help them.

Help complaints – a caller said the Bahnano organization did not provide assistance fairly and did not answer his phone lines. A caller in Abudwak said WFP had promised them cash cards but they had not received them.