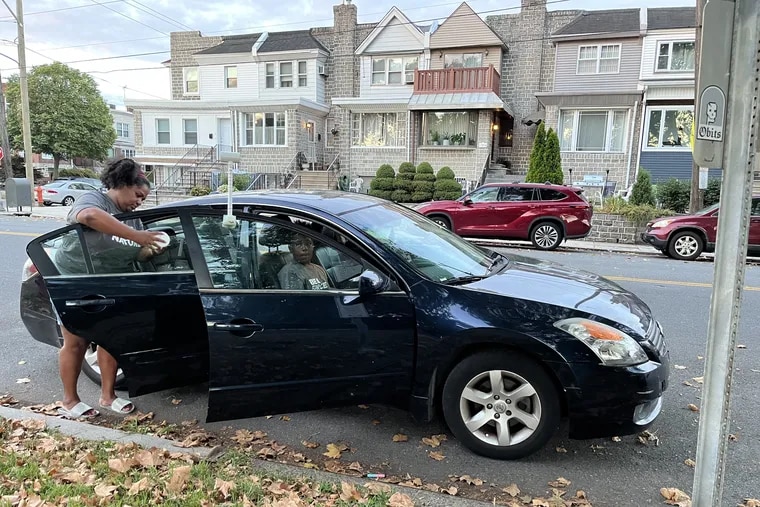 Meeka Outlaw mounted a temperature sensor to the front passenger side window of his navy blue Nissan Altima just before daybreak Saturday, then attached a rear passenger side air pollution sensor, waiting for it to flash in green and let him know that the mission was since.

Concerned that the air pollution monitor didn’t seem to be blinking — a signal that the GPS was working — she waited a few more minutes until it finally came online. Relieved, Outlaw climbed into the driver’s seat, her son, Rashid, 12, next to her, and began to drive a carefully plotted 13-mile route through South Philadelphia, beginning at Marconi Plaza.

Rashid was still sleepy, but started to wake up and witness his first sunrise in the city.

The duo were part of a day-long, citywide effort to measure heat and pollution in urban heat islands – areas with little shade and lots of concrete and asphalt can reach 15 to 20 degrees warmer than surrounding areas. They were among 50 volunteers who traveled 10 routes with specially equipped cars covering most of the city as part of a federally supervised study Oceanic and Atmospheric Administration.

Philly was one of 16 communities in the United States and abroad chosen to measure the effects, but only one of the few cities to record pollution.

“I hope this helps show the city of Philadelphia that there is a need for more green space to help their environment, and that not every lot in the city needs to have a home. or a building on it,” said Outlaw, founder of Grays Ferry Residents Organized for Advocacy and Leadership (ROAD). “At Grays Ferry, green spaces are rare. Trees and parks are important for gardening, bees and just having space for peace of mind.

Each vehicle like Outlaw’s had to travel around town in three-quarters of an hour starting at 6 a.m., 3 p.m. and 7 p.m., according to organizer Richard Johnson, director of community science at the Academy of Natural Sciences. University of Drexel. The volunteers planned to cover about 100 square miles, or more than 70% of Philadelphia’s 140 square miles.

Johnson said the study will show which areas of the city are suffering the most from heat and pollution. Extreme heat kills more people than any other weather event, according to federal officials, who say climate change is exacerbating the problem. During the last heat wave that ended on Tuesday, at least five deaths were reported in Philadelphia.

Heat can also exacerbate the effects of pollution. Often the worst neighborhoods are in communities of color or low income.

“Hopefully it will create a lot more awareness of the issues because we involved the community in the process of gathering all the information,” Johnson said. “This will allow the city to make more informed decisions about equitable solutions for heat and air quality.”

The study is part of an effort by the National Integrated Heat and Health Information System (NIHHIS), in partnership with CAPA Strategies. The NIHHIS is a NOAA campaign. And CAPA is a private company that receives federal funding to capture and analyze data, as well as create digital tools used to develop local resilience plans.

Air quality sensors recorded PM2.5, or fine particulate matter. Of particular concern are PM2.5, defined as concentrations of 2.5 microns or less. The particles are smaller than the width of a human hair and easily inhaled. They are responsible for the greatest proportion of the health effects of air pollution.

The main sources of PM2.5 outdoors are from exhaust from motor vehicles, construction equipment, power plants, and operations that burn wood, oil, or coal. Particles form when emissions react in the air. Health effects can result from short or long exposure and can range from aggravation of asthma and other respiratory diseases to premature death in people with chronic heart or lung disease. Children and the elderly are the most vulnerable.

For the data to be meaningful, NOAA issued instructions that collection should be done on a day that is 90 degrees or warmer, with very little wind and clear skies. Saturday turned out to be near perfect with an expected high of 90, a light breeze and lots of sunshine.

“The sensors collect a measurement like every second,” Johnson said. “They will take all of those thousands and thousands of information points and compile them into a detailed heat and air quality map for the city that will come out in the fall.”

As she drove, Outlaw, a teacher at St. Francis Cabrini Catholic School, wearing a “Be a Force of Nature” t-shirt provided for the trek, squinted at the rising sun as Rashid thumbed through the instruction pages. Together they raced the car through dozens of streets such as Tasker and Packer, Passyunk and Snyder Avenues, and Columbus Boulevard.

“Right or left on the 20th?” Outlaw asked his son, the navigator, one of the many times they had to stop and go their way.

“I think,” Outlaw said, “that in areas where there’s more green space, it’s not as hot and it’s not as polluted.”