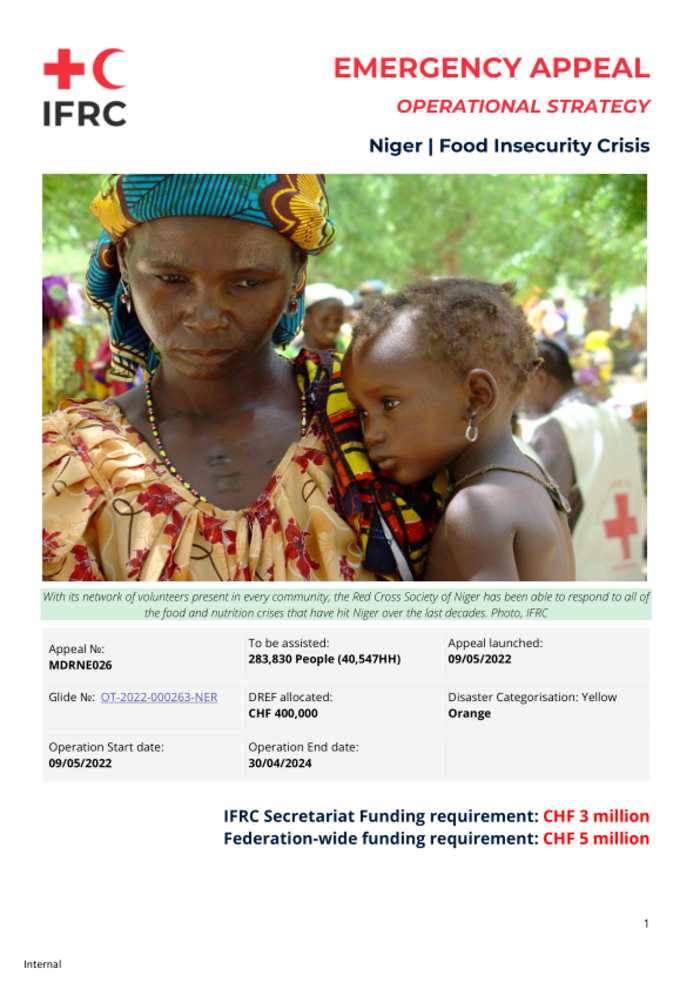 Niger is currently affected by the worst food security crisis in this decade, with 4.4 million people in need of immediate humanitarian assistance. This crisis is part of a context of continuous deterioration of security in the Sahel region, which further aggravates the socio-economic vulnerabilities of the population. In line with the IFRC’s Pan-African “Zero Hunger” initiative, the IFRC presents below the operational strategy to implement its food insecurity crisis emergency appeal to assist the Niger Red Cross (RCSN) to mobilize resources to intensify its humanitarian assistance. in the affected regions of the country.

In Niger, more than four million households are facing the devastating effects of food insecurity caused by consecutive failed rainy seasons and decades of increasing desertification of the Sahel. Men, women and children do not have adequate access to food and are exposed to several threats affecting their well-being. These threats are natural hazards (climate, drought and fires), epidemics (measles, malaria, meningitis and cholera) and insecurity, leading to population movements and competition for resources. The situation of severe food insecurity is confirmed by the conclusions of the Harmonized Framework (IPC), which indicate that between 2.5 and 3.3 million people are currently in a situation of food insecurity throughout the country (Phase 3 to 5 according to the Integrated Food Security Classification – IPC Phase), and that between 3.6 and 4.4 million people will be food insecure during the period June-August 2022 due to a delayed 2022 rainy season and an irregular distribution of rainfall, long periods of drought and high risk of flooding that can lead to crop losses, loss of property, and animal and human lives in exposed localities. The pastoral season in Niger takes place early in the year due to livestock feeding difficulties, watering conditions and fodder shortages. Herd movements are also disrupted due to the security situation. Consequently, livestock are concentrated in secure areas, leading to risks of conflicts between farmers and the emergence of animal diseases.

A joint analysis of the food security and livelihoods situation in the Sahel and West Africa sub-regions is conducted every six months by governments and stakeholders, including the Movement of the Red Cross and Red Crescent. Cereal production recorded a drop of 39% during the 2021-2022 agricultural campaigns, which currently registers a gross deficit of two million tonnes in all regions of Niger. Agricultural markets are disrupted due to the poor agricultural season, border closures due to the COVID-19 pandemic and insecurity. This inevitably led to higher inflation and higher prices for major food staples and livestock, in some cases more than 40% above the five-year average for staple foods. The impact of the ongoing crisis in Ukraine has further exacerbated inflation and rising prices for agricultural products, particularly wheat, rice and fertilizers.

The population of Niger faces nutritional challenges due to lack of absorption of essential nutrients and inadequate nutritional practices. According to the Nigerien government, a total of 2.3 million people need curative or preventive nutritional support while 457,200 children under five suffer from severe acute malnutrition (SAM). Due to insecurity in Niger, many health centers in rural areas have closed, their services have been interrupted or they have no access to medicines. This situation is expected to deteriorate further during the lean season. Only 56% of the population has access to a source of drinking water, 13% has access to basic sanitation services, while open defecation is practiced by more than 71%. These sanitary conditions are conducive to the development of diseases that will have significant negative impacts on the nutritional status of the population.

Without decisive action, there will be a steady increase in food insecurity, levels of malnutrition and associated opportunistic diseases, as well as increased exposure to epidemics. The number of food insecure people will increase as more farmers lose their crops and livestock. For example, the available production of all cereals (millet, sorghum, maize, fonio and rice) is 2,946,231 tons compared to the consumption needs of the population for all of these crops, which is estimated at 4,950,711 tons. Cases of diseases and epidemics such as malaria, measles and meningitis will increase as people suffering from food insecurity and malnutrition have weakened immune systems, are more vulnerable to infections and suffer from severe symptoms that can lead to death .

In response to this situation, the Government of Niger has launched its “Support Plan for Vulnerable Populations” which targets populations in severe food insecurity with the primary objective of contributing to the sustainable resilience of populations and emphasizing the protection mothers to ensure their role in household well-being. It was essential for the RCSN, as a leading and highly respected humanitarian partner of the government, to immediately engage in this response, and this was strongly recommended by the IFRC in view of the many years of experience accumulated since the cash distribution activities in the Diffa region. in 2017, followed by IFRC Early Action support.

The 7 Best Internet Browsers for Windows 11