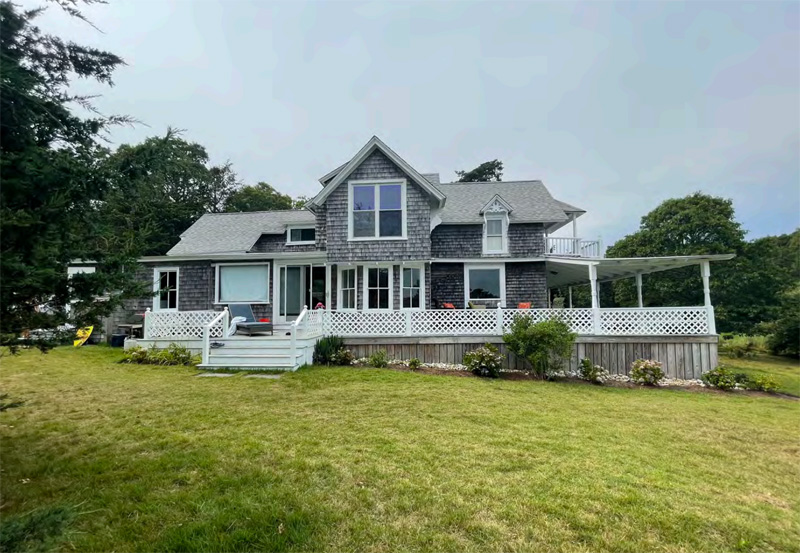 The Martha’s Vineyard Commission has approved a historic demolition of 9 Beecher Park in Oak Bluffs.

The vote was 11-0 with three abstentions.

The project proposes to demolish the existing 2,029 square foot, six bedroom home and construct a 3,593 square foot, four bedroom home in its place. The existing garage would also be replaced by a new one with an office on the second floor. The new building is intended to be the year round residence of the Callahan family. Records show the Callahans bought the house for $ 1.36 million in September 2020.

The existing house was built in 1877 in the style of the campground, with many additions made over the years. The building is listed on the Massachusetts Cultural Resource Information System (MACRIS).

While reviewing the pros and cons of the project, the commissioners were divided on how to judge the demolition.

Commission President Joan Malkin said given the house’s decent condition the demolition was detrimental, but some Commissioners would say the proposed replacement does a “reasonably good job” of maintaining the architectural representation. .

“I think maybe we need to leave this one with ambiguities or positions on both sides,” Malkin said.

“While I don’t like to see old houses disappear. It’s nice to see a replacement which I think is a meaningful attempt at a building that seems to have belonged here, ”said Fred Hancock, Commissioner of Oak Bluffs.

The three Commissioners who abstained were Ben Robinson, Christina Brown and Jay Grossman.

Robinson said the house was not replaced by a small house, but rather by a larger house.

“It’s a very different animal than what you imagine to be the right kind of house to move forward on,” Robinson said. “I think it’s important when we think about historic replacement that the buildings we’re replacing are more efficient, but they’re not even smaller. I think this is another element of climate change that we are not yet fully weighing. There is a material impact on the planet which is part of climate change as large buildings are always also a detriment. “

Robinson told The Times on a phone call that he abstained because he was in conflict with the project, but ultimately felt it was “a missed opportunity.”

Brown abstained because she was not entitled to vote. Grossman could not be reached immediately for comment.

The commission was unanimous in determining that a public hearing was not necessary for a review of modifying the SAV / FedEx Ground facility to replace two mini storage units with two modular docks, but continued with the project to allow the applicant to work with MVC staff on the project. conditions.

The facility’s existing modular docks will house a service center and employee offices.

The project is designed to meet the growing demand for online orders increased by the COVID-19 pandemic. The new modular docks will increase the number of FedEx vehicle delivery doors from seven to 20.

According to a report from commission staff, Allen Scott, the applicant for the project, said the new modular docks will be fully electric and FedEx may implement electric vehicles on a case-by-case basis.

The project proposes to demolish the four-bedroom early-summer chalet – one of the few remaining in Katama – as well as the guesthouse and garage. It would be replaced with a four-bedroom home, detached garage, detached fitness studio and spa, outdoor pool, hot tubs, cabana, and decks.

The house was built in 1904, probably by William F. Jernegan, who obtained land in Katama in 1896 and 1907. The property could have been part of a working farm.

The house is not in any historic neighborhood and is not listed in the Massachusetts Cultural Resources Information System (MACRIS), but is among the oldest summer homes in Katama.

Changes were made between 1991 and 2008 with a guesthouse added in 2000 and extensive renovations in 2002 that removed most of the interior historic elements such as the building’s framing, windows and doors.

The committee voted 11-5 with one abstention not to approve the project. The project is now entrusted to the Edgartown Town Planning Council.