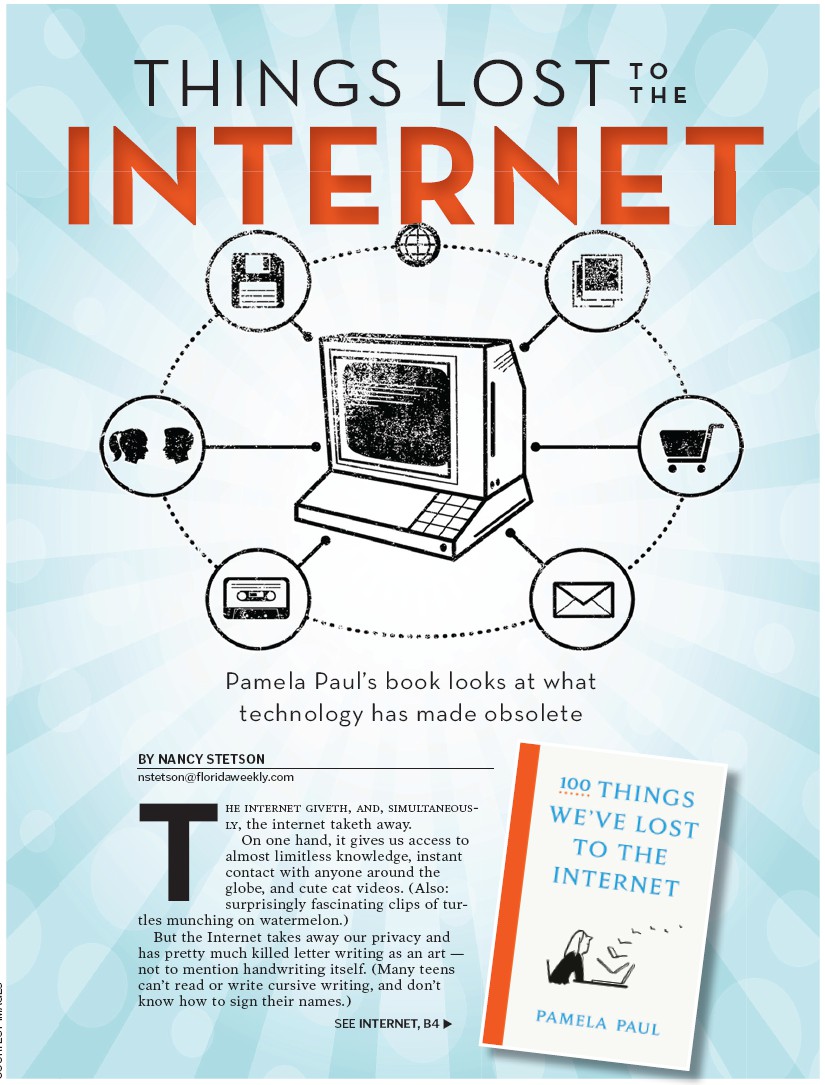 LOST ITEMS ON THE INTERNET

JTHE INTERNET GIVES AND, SIMULTANEOUSLY, THE INTERNET TAKES BACK. On the one hand, it gives us access to almost unlimited knowledge, instant contact with anyone in the world, and cute cat videos. (Also: Surprisingly fascinating clips of watermelon-munching turtles.)

But the internet robs us of our privacy and has all but killed letter writing as an art, let alone handwriting itself. (A lot of teenagers can’t read or write in cursive, and don’t know how to sign their name.) And that changed our understanding of downtime, too; people don’t think or dream as much as they used to.

Do you have a free minute? You probably don’t use it to contemplate your existence, plan your future, or let your mind wander. You probably pull out your phone to check your email, Twitter, TikTok, or YouTube. Scroll, scroll, scroll.

The internet has taken more from us than we think.

Pamela Paul wrote a book about it: “100 Things We’ve Lost to the Internet”. 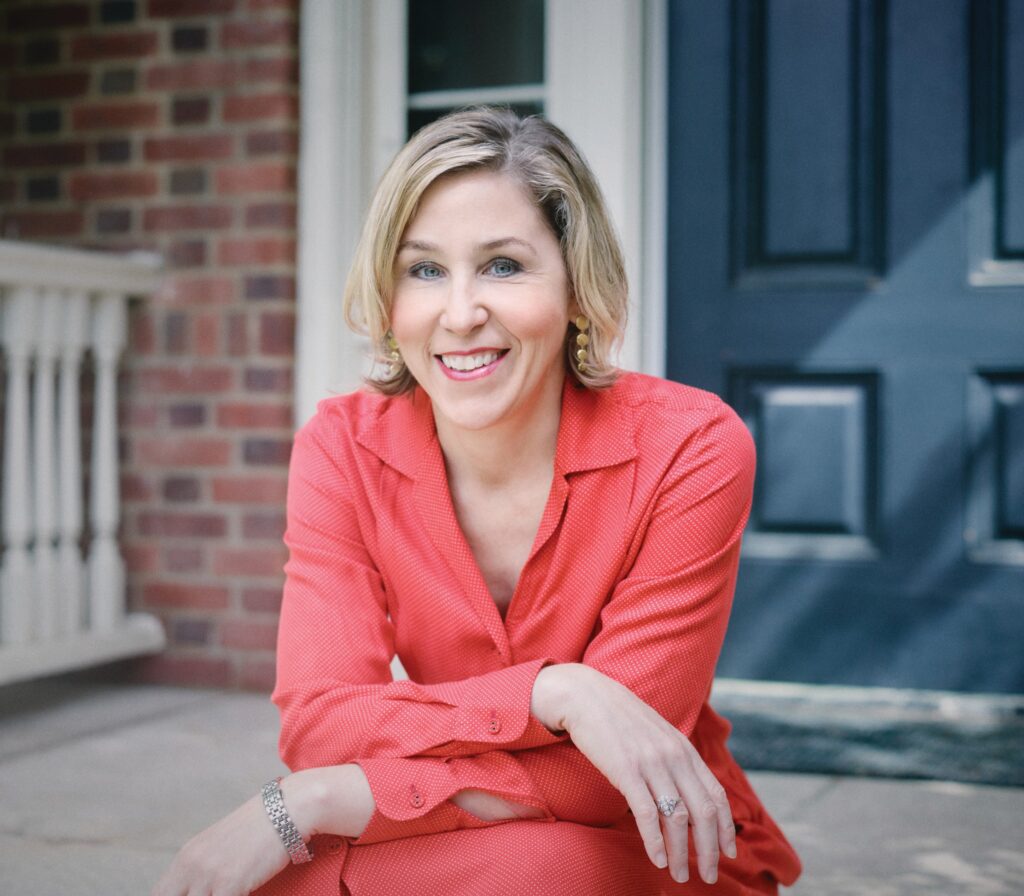 Think of it as 100 short eulogies about things the internet has killed.

But this is not a preachy tome; the 100 trials are short and funny.

Mrs. Paul is not a Luddite, although she sometimes lets out her inner grumbling.

“I think we’re weird, funny creatures, and you have to see the humor in that,” she says. “The internet has done terrible things, serious things, but they have been amply covered (elsewhere. Things like) effects on democracy and privacy. And misinformation.

“I tried to take a look at some of the smaller, more personal, fun everyday things.”

Number 79: Find out who this actor is.

Not only did she have no trouble finding 100 Things We’ve Lost, but she had to “fudge the math,” as she puts it, and mention various things in an essay.

The benefits of boredom

The first thing she lists that we have lost to the Internet?

In February 2019, she wrote an op-ed for the newspaper titled “Let Children Get Bored Again”. The subtitle of the play: “Boredom teaches us that life is not a parade of amusements. More importantly, it engenders creativity and autonomy.

The editorial sparked the idea for the book.

“The idea is that when you have this little device, you have a phone, portable internet anytime, you have constant access to an unlimited array of distractions and entertainment,” she says. “There’s no time in the day when you have nothing to do, it’s just gone.

“What you lose with this, you have lost boredom. How could you be bored, when you have all this at your fingertips? Good riddance!

“But the thing is, dull moments stop all input. That’s when we generate output, which is when we’re creative. As we’re not constantly dealing with things coming from the outside, we can generate our own ideas.”

We have our most exciting eureka moments in the shower, she says, because it’s the only place where we don’t have our devices and let our minds wander.

“We don’t teach people to endure boredom anymore,” she complains. “They don’t have that ability to be creative, to think for themselves, to figure things out for themselves, to be resourceful. People complain (that) the younger generation needs constant entertainment, they can’t be alone.

“We set them up that way. They weren’t forced to (deal with boredom).

When the pandemic hit, the internet was a lifeline, Ms. Paul notes.

“During lockdown, the internet basically got us through it,” she says, listing its importance in providing “communication with loved ones, the connection for people to work remotely, to earn a living.”

But she mourns some of the things the internet has erased from our lives.

“I have a very strong appreciation for things, not just from my past, but things before my time,” she says. “It comes from being a literature reader and studying history in college. A lot of things have improved, but I don’t think the world is simplistic. There’s a lot of things from the past which I appreciate, and we, as a culture, appreciate.

But often, she says, we get the message that “moving forward is always better, (that) getting the next thing is going to make our lives better. Some people realize at some point that this is not true. But when it comes to technology, the sell is this: you’ll be so much better off when you get it. Or: there is something wrong with you, you are afraid of the future if you do not buy or use this new service or application that has been created. »

It opposes the forced obsolescence of modern technology.

“There’s no reason to buy these things, but yet the industry forces you to buy them,” she says.

The things we’ve lost to the internet are nuanced. A loss can mean one thing to one person and another to another, she points out. A person may even feel mixed about a loss.

For example, she is relieved that she no longer gets lost, because she now has GPS, Siri and Google Maps.

“I can constantly situate myself,” she says. But still, “you may remember that at the age of 20, you got lost on purpose. Frank Rich wrote in his memoirs, in which he remembers traveling with his mother or grandmother, and she was like, “Let’s go!

“There’s something really amazing about that. It is a lost opportunity not to know where you are in this world. So things can be positive and negative, depending on the person at any given time.

The loss she feels most sad about, Ms. Paul says, is the ability to be in one place at a time.

“With the internet running in the background, it’s really hard to focus on what’s going on at any given time and not get distracted,” she says. “I think we are always aware that there are 100 or more people knocking on our virtual door: chat, text, like, follow, email or Google invite.

“There’s this constant feeling that whatever you’re doing, there’s all these other things you could be doing at the same time. For people, this makes it all the more difficult to live in the moment, to focus on where you are and to dedicate yourself to it.

She remembers a time when people went on holiday to another continent or country and were unreachable while they were away.

“It did not end in a global crisis. Nothing prevents us from starting again.

“I think what people don’t realize is that we are responsible for our own choices here,” says Paul. “You can choose when to log in. But most don’t. ¦

Text message telling users that Singpass account needs to be reactivated is a scam: GovTech