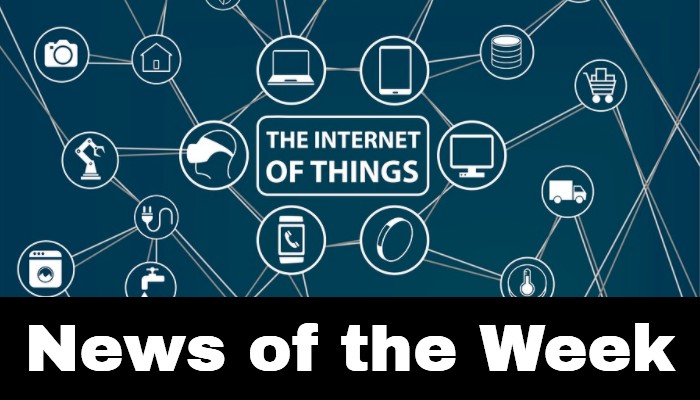 Here are some of the IoT news stories making waves this week. Subscribe to our newsletter to receive it in your inbox every Friday.

From hot mugs to coolers: Ember, the company behind the self-heating Ember coffee mug (the best gift I’ve ever given!) has launched its first B2B product, a refrigerated cube designed to ship medical items that need to stay cold . Last year, Ember said it would expand its product portfolio and shocked many when it announced it would switch from hot to cold. Sure, you might think that building temperature-controlled enclosures is basically the same, but the mechanisms for keeping things hot and cold are very different. And with this product, Ember is proving it can do just that, opening up a much wider business opportunity and probably reassuring investors who didn’t want to end up with a miracle product. Ember has signed a partnership with Cardinal Health, which has experience shipping drugs, to prepare for the product’s release later this year. (Tech Crunch)

Public opprobrium can work… sometimes: Life360 said it would stop selling location data on a large scale after a report by markup pointed out that he was one of the best sellers of location data to data brokers. The news horrified many, especially since Life360 is popular with families trying to keep track of their children. In response, Life360, which earned $16 million from location data sales in 2020, expanded its location data sales to just two companies, Allstate Airity and Placer.ai. Allstate’s sales are tied to insurance policies that use data to set premiums based on risk, and will only be allowed to use aggregated data in the future. Go journalism! This is also why we need much more transparent data policies, even if not everyone cares to read them. (The edge)

Australian Telstra Purple acquires two companies to develop IoT capabilities: Telstra Purple has agreed to buy Alliance Automation and Aqura Technologies. Terms of the Alliance Automation deal are not disclosed, but the Aqura seller says the deal was valued at $30 million in cash. Alliance Automation makes industrial control systems software and will help boost Telstra’s sales efforts to businesses in need of digital transformation, while Aqura provides advice and services and will help set up private networks. It’s a good time to be in the service industry, as IoT deployments are still quite heavy. (RNA)

Keep an eye on this company (and the trend): Not exactly an IoT story, but I couldn’t help but notice this story about Metronome raising $30 million to help implement IoT-based pricing. use. Today, it aims to help SaaS companies that typically charge a monthly fee for accessing a software service to align their pricing with usage fees, which involves a surprising amount of work. Usage-based pricing software already exists (think telco OSS billing software), but it’s difficult to build software that can charge as you go and quickly change rate plans. And yet, it’s clear that for software and the physical world, connectivity and sensors make usage-based pricing viable and likely to happen. (Tech Crunch)

Insurers are finally embracing smart home technology to reduce claims: It took a lot longer than I thought, but the insurance world is finally starting to ship connected sensors to policyholders to detect leaks and prevent claims. Chubb has apparently embraced both leak and temperature sensors and is offering discounts to customers who deploy them. According to a Chubb executive, residential customers can save about 3% on their premiums with sensors and 8% if they install devices that shut off the water. Meanwhile, Chubb has acquired StreamLabs, an Australian sensor company, to control its own sensor destiny, a strategy I expect to see more and more companies looking to ensure the quality of their data. Unfortunately for consumers, this means that if you change insurers, you may need a new set of sensors. (Insurance Journal)

Learn more about LoRaWAN: In case my overviews of low power WANs are confusing, Kevin has written an article LoRaWAN 101 which provides some basic terminology and information to help decipher what can be a confusing industry. (StaceyonIoT)

Maybe the smart home folks need to talk to automakers about energy resilience: I’ve been very excited about how connected devices and smarter breaker boxes can combine with software to add electrical resiliency to homes, and now there’s a new player under the shape of Ford’s new F-150 Lightning truck. Ford is working with Sunrun, a solar panel installer, to install and sell a specially designed charger that can handle two-way power flow and charge the truck. The F-150 Extended Range Battery System can store 131 kilowatt hours of electricity, which is enough to meet the energy needs of an average home for three days. It’s pretty awesome and something I’d like to see more of as more people embrace EVs at home. We already use our Tesla as a giant battery to charge devices during power outages, but I can’t take advantage of its battery to power my coffee maker or a heater right now. I wish I had this for future vehicles. (Electric Car Report)

Samsung SDS is no longer in the business of commercial locks: Zigbang, a real estate technology company in South Korea, will acquire the home IoT business of Samsung SDS for an undisclosed sum. Samsung SDS is a managed security service that also provides hardware such as door locks and wall switches. The smart home business in the security industry was a bit strange, and Samsung tried to sell its IoT hardware business to Allegion (the parent company of Schlage locks) in 2016. So it took a while, but now Zigbang has purchased the company and will likely end up providing services and materials to multi-family housing providers and other commercial housing providers in the future. (Trade standard)

The Thread Group prepares to take commercial Thread: The Thread radio standard was developed to connect IoT devices by companies more commonly associated with the smart home, but the Thread group has long had commercial ambitions. And it looks like Thread Group is planning to make 2022 the year it transitions into serious business consideration. The Thread protocol enables a low-power, distributed mesh network that can connect directly to the Internet without requiring an intermediary like Zigbee and Z-Wave do. This is probably even more useful in commercial buildings where sensor networks are much larger and need to be more robust. The Thread group is working to help prepare several existing smart building protocols, such as BACnet and DALI, to transition to IP networks that can also communicate directly with the Internet. So keep an eye on Thread for commercial deployments to see if it will succeed in the wider commercial world. (The thread group)

The US Army’s M1 Abrams: The Greatest Tank Ever?