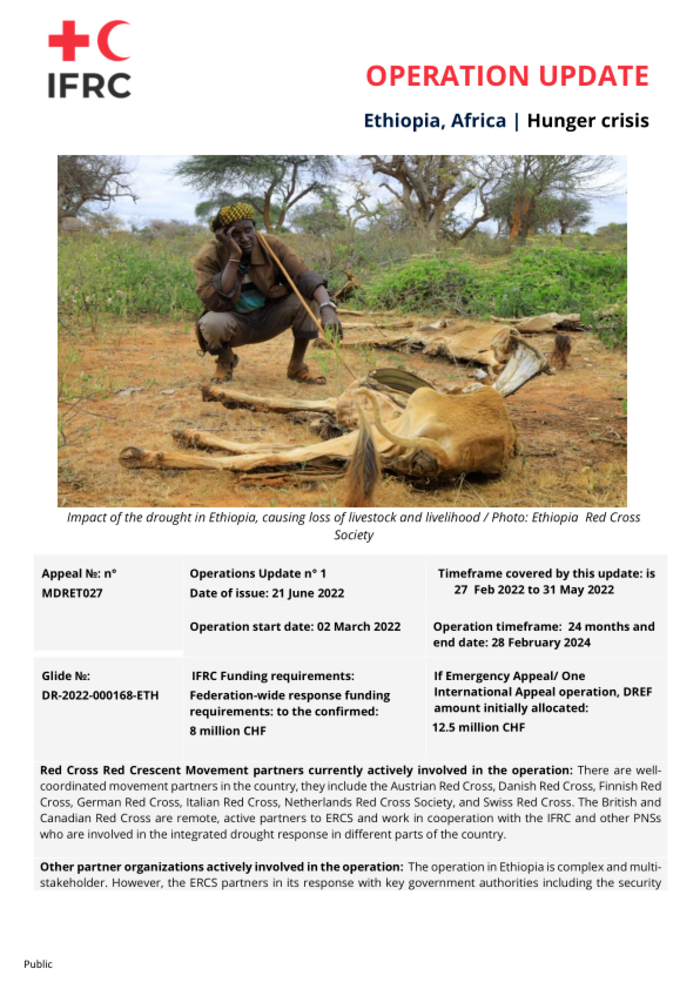 A. THE DISASTER AND THE RED CROSS AND RED CRESCENT RESPONSE TO DATE

February 10, 2022: The Somali regional government submits a request to the ERCS appealing for support to respond to the drought.

January 2022: The Ethiopian Red Cross Society (ERCS) conducts an in-depth assessment following the worsening drought conditions in the Somali region and in the Borana and Moyale areas of the Oromia region.

March 1, 2022: IFRC publication 507,108 Swiss francs from the Disaster Relief Emergency Fund (DREF) to support the ERCS response in the Somali region and the Borana and Moyale areas of the Oromia region.

March 29, 2022: IFRC publishes a Federation-wide hunger crisis emergency appeal for 12.5 million Swiss francs to support 500,000 people in the most affected areas of Oromia, Somalia and in the Southern Nations, Nationalities and Peoples’ (SNNP) regions, for a period of 24 months.

Overview of the situation

The Horn of Africa

The eastern region of the Horn of Africa has experienced drought conditions following consecutive poor rainy seasons since the end of 2020, leading to significant impacts on production, vegetation, water resources, insecurity food and livelihoods.

Food insecurity is rapidly worsening in East Africa – an estimated 81.6 million people, including internally displaced people, refugees and host communities in rural and urban areas, face food insecurity high treble. This represents an increase of around 39 percent from the 58.6 million recorded in November 2021. The overall food insecurity situation is expected to worsen in most countries in the region during the lean season as they face multiple and overlapping shocks (drought, floods, macroeconomic challenges, and conflict).

The nutritional situation in the region is critical, with an estimated 7 million children under the age of 5 expected to suffer from acute malnutrition in Ethiopia, Kenya and Somalia, including more than 1.7 million from severe acute malnutrition. There is a high likelihood that the nutritional situation will deteriorate over the next three months, exacerbated by the unaffordability of nutritious diets and the impacts of drought.

An estimated 8 million people in Oromia, Somalia and Southern Nations, Nationalities and Peoples (SNNP) and Southwest regions are drought-affected and in need of food assistance after three seasons of consecutive below-average rains and high temperatures. Floods and conflicts have also contributed to making populations less resilient to the impact of drought. Oromia and Somali regions are the most affected. About 3.4 million people in Oromia and 3.5 million people in Somalia need humanitarian assistance. In southern Ethiopia, around 175,000 people have been displaced by drought. Households, with their livestock, move to areas where they can seek better livelihood opportunities and water sources.

According to UN OCHA 2, the May 2022 report revealed that more than 8 million people are affected by drought in the affected regions (Somali 3.5 million, Oromia 3.4 million, SNNP 1 million and South West 15,000 people), including 7.2 million severely food insecure and 4.4 million people in need of water assistance. Additionally, 2.1 million head of cattle have been reported dead, while at least 22 million head of cattle are at risk and are very weak and emaciated with little or no milk production.

The drought in Ethiopia has exacerbated existing fragilities by increasing food insecurity and malnutrition as well as straining the resources of communities heavily dependent on livestock products. Livelihoods of pastoral and agro-pastoral populations have been decimated with the death of over 1.46 million head of cattle, with the burden most heavily felt by those in the Somali region, accounting for 67% of that figure according to data available. People in Oromia, SNNP and South West regions have not been immune to the burden of these shocks, their livelihoods being particularly vulnerable to the decline in the market value of spoiled animals and, by therefore, to the reduced nutritional sources they offer.

In addition, precipitation forecasts (local, regional and global) for the rainy season from March to May 2022 indicated a below-average performance, especially in most drought-affected areas. While seasonal rains normally begin in March and peak in April, forecasts indicated the likelihood of a delayed start. By mid-March, most beneficiary areas had received no rain, and the spatial distribution raises fears of a likely fourth consecutive bad season that could lead to an unprecedented climate emergency in the region.