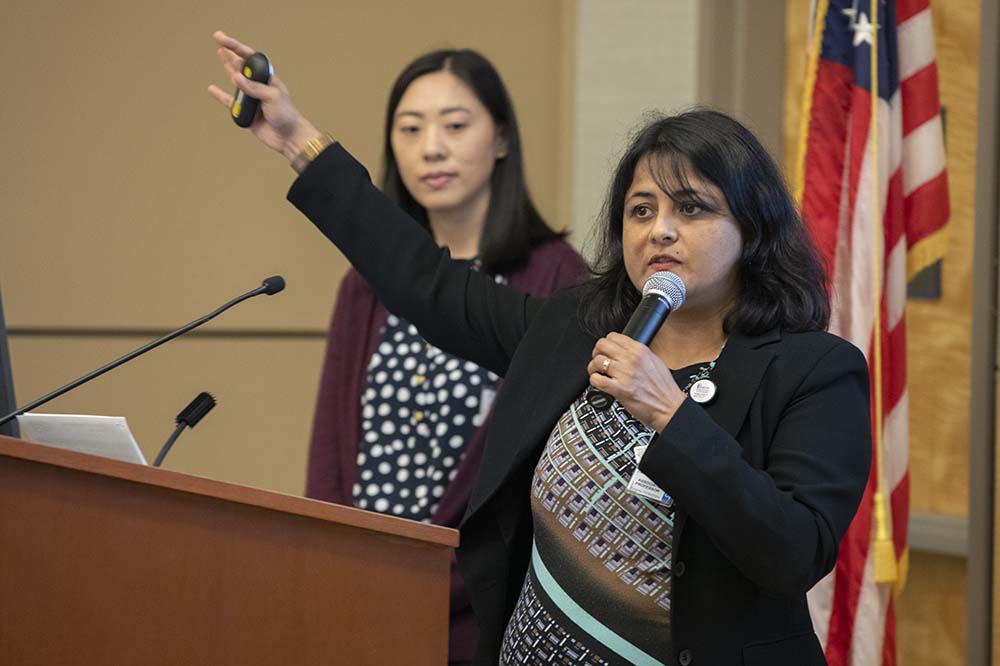 Mako sharks can swim up to 60 miles per hour, perhaps the fastest of all sharks on Earth. They are renowned for their feistiness and can leap 20 feet above the surface of the water, according to National Geographic.

Greenland sharks are at the other end of the speed scale, with a maximum travel time of less than 2 miles per hour.

Insurance claims submitted to payers by MUSC Health need to move more like Makos, according to one of three winning teams in the Medical University of South Carolina’s “Shark Tank” contest. Well, they used the comparison between driving a car and walking, but the intent was the same.

“Currently, MUSC is working to all of our destinations. We send claims manually to our payors. That means we could send them on paper, by mail, whatever. And the delays that reach the payor affect us from the point from a revenue perspective,” said Franco Cardillo, member of the winning group in the Care Delivery category and director of patient financial services at MUSC.

“So what we’re trying to do and show you here today is basically there’s automation available in this space to help us bring ourselves, our claims and our payers into the new generation.”

The plan is to integrate automation into the existing electronic health records system – and bring in a lot more money. “Delays in getting claims to the payor affect us from a revenue perspective,” Cardillo said. “This automation can help us reduce nearly 40,000 rejections per year.”

The Sharks have been sold. They awarded this team $15,000 to help them achieve their goal. The judges included:

In the Education category of Shark Tank, the winning team presented a virtual global health curriculum for nursing students. Suparna Qanungo, Ph.D., director of global health at the College of Nursing, said the pandemic contributed to this innovation.

“We did a pilot in November 2021 with student nurses. It was a 10 day program. The students virtually visited Ecuador the first week and Nicaragua the second week. The training was delivered through online modules on the Canvas platform,” she said.

They also virtually visited Costa Rica. The students not only read about and discussed health care in these places, but also participated in consultations and, in the case of Costa Rica, learned about the mental health of migrants.

Student Kate Ague-Kneeland told the Sharks it has given her a greater appreciation for communities around the world without having to travel. “We were exposed to all these different sites with really unique social, cultural, even political and geographical influences on health. And we were able to take all the concepts we learned in the didactic courses and combine them into a real-world experience. »

The Sharks bit, granting the program $15,000 to help support it.

The last contest winner was in the Research category. Jessica Chandler, Ph.D., assistant professor at the College of Nursing, and Bernie Jansen, application development manager in biomedical informatics, made this pitch.

“Our idea is called AppBuilder. It is a new content management system designed to help innovators and researchers. This will allow researchers to reach an end product, such as an mHealth app, faster and with less time and less money,” Chandler said.

“It cuts the time it takes to create a normal app by a third or even 50%, depending on how much or what you want. If we’re talking about a simple app, we cut the time spent on developers,” Jansen said.

“There are hundreds and hundreds of other drag-and-drop app builders out there, but the significant difference is this: We use a native coding language. This means we can take full advantage of anything out there. inside the phone,” he said.

“The second part is that their equipment is not for medical research. Their equipment has the normal person on the street that does that. One of the top rated doesn’t even have a survey. For a researcher, it’s “is mandatory. It’s up to us, we do it, and we can do it well. We’re already ahead of those hundreds of other companies that you might think of as competitors.”

The $15,000 they won will go towards pilot projects that will test how well AppBuilder works for real-world users.

All projects presented at Shark Tank, not just the winners, will be scrutinized by MUSC executives. This includes projects offered at two other MUSC Health sites, in Florence and. Marion divisions.

Chief Innovation Officer Jesse Goodwin called it good to see the innovators in person this year after a few years of virtual presentations due to the pandemic. “I think it’s really important to build a culture where we don’t feel stuck with problems, but a culture where we say, well, look at this as an opportunity to really solve problems,” he said. she declared.

The Innovation Week, which ran from April 25-29, included several events, with tracks focusing on ideas, how healthcare is changing, ensuring everyone has access to good healthcare. health, creation and collaboration and well-being. There were not only live Shark Tank events, but also poster sessions, on-demand events, and information about campus resources for innovators.

“We’ve actually invested over half a million dollars in the ideas that you come up with. And I think that’s really exceptional,” Goodwin said.

You can find a list of all winning Team Shark Tank members on the event’s online schedule.

As situation improves, mobile internet services restored in Patiala at 4pm instead of 6pm: The Tribune India