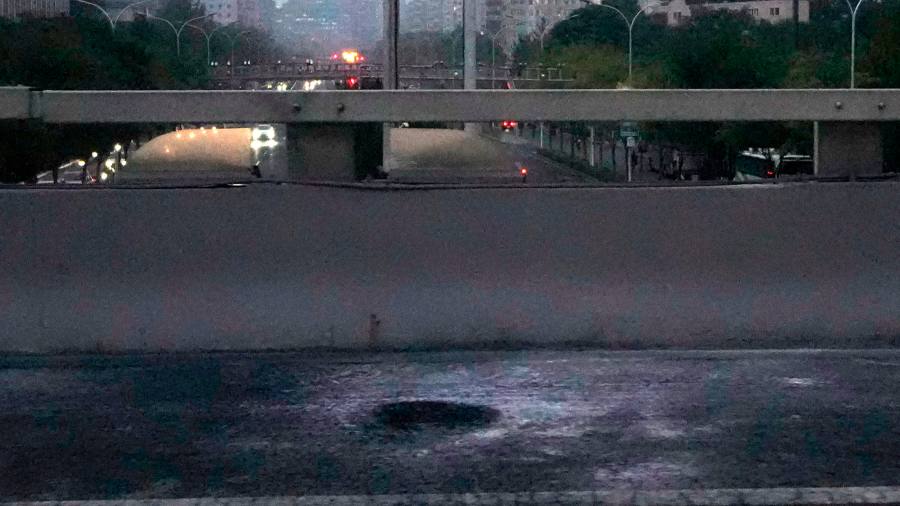 Chinese censors have gone into high gear to clean the internet of evidence of a rare protest in central Beijing calling for the removal of President Xi Jinping.

The small-scale protest, which involved a fire and two handwritten banners draped from a road overpass, came as the Chinese capital tightens security for the ruling Communist Party’s most important political meeting in a decade.

Red characters written on the banners targeted “dictator and traitor Xi Jinping”, days before the president was to win a third term as party leader. The messages also called for an end to the country’s draconian zero Covid policies.

One banner advocated strikes in schools and workplaces to remove the Chinese leader, while the other said: ‘We don’t want PCR tests, we want food, we don’t want lockdowns. , we want freedom”.

“We don’t want figureheads, we want to vote, don’t be a slave but a citizen,” the banner read, according to images posted to Twitter.

Public criticism of the Chinese leader is rare. Real estate tycoon Ren Zhiqiang was arrested two years ago after writing a thinly veiled criticism of Xi’s handling of the coronavirus outbreak. He was later charged with corruption and sentenced to 18 years in prison.

Among the slogans: ‘I don’t want PCR tests, I want to eat’

“I don’t want a cultural revolution, I want reforms” pic.twitter.com/9RwyDb36RM

Photos and videos of the two banners next to a column of smoke ricocheted across the internet in China on Thursday, until the country’s censors caught up with them.

Tencent’s WeChat and Twitter-like Weibo service removed all mentions and images of the protest and deactivated thousands of user accounts that posted them.

Several users who shared the images on WeChat reported that the app, which is essential to daily life in the country, banned them from messaging and other functions for a 24-hour period as punishment. for violating “relevant internet policies”.

Meanwhile, Weibo blocked all results for a host of keywords related to the incident, including “bridge”, “brave” and “warrior”.

Teng Biao, a human rights lawyer and visiting professor at the University of Chicago, said it was a significant embarrassment to Xi that China’s surveillance state did not prevent the protest before the meeting very important to the party.

“The protest echoes the views of many Chinese people, they are angry especially at the way Covid-19 has been handled, but everyone has been silenced.”

“This protest is a very important symbol of Chinese society’s anger and discontent,” Teng said. “That’s why censorship has gone mad.”

Chinese officials spent months preparing for the party congress, eliminating any possible distractions. The Ministry of Public Security launched a 100-day operation in which 1.4 million people were arrested to lay a “solid foundation” for the opening of the congress on Sunday.

Meanwhile, Beijingers taking the subway are forced to prove their liquids are safe by taking sips, and transit hubs across the country have stepped up surveillance of ethnic minorities.