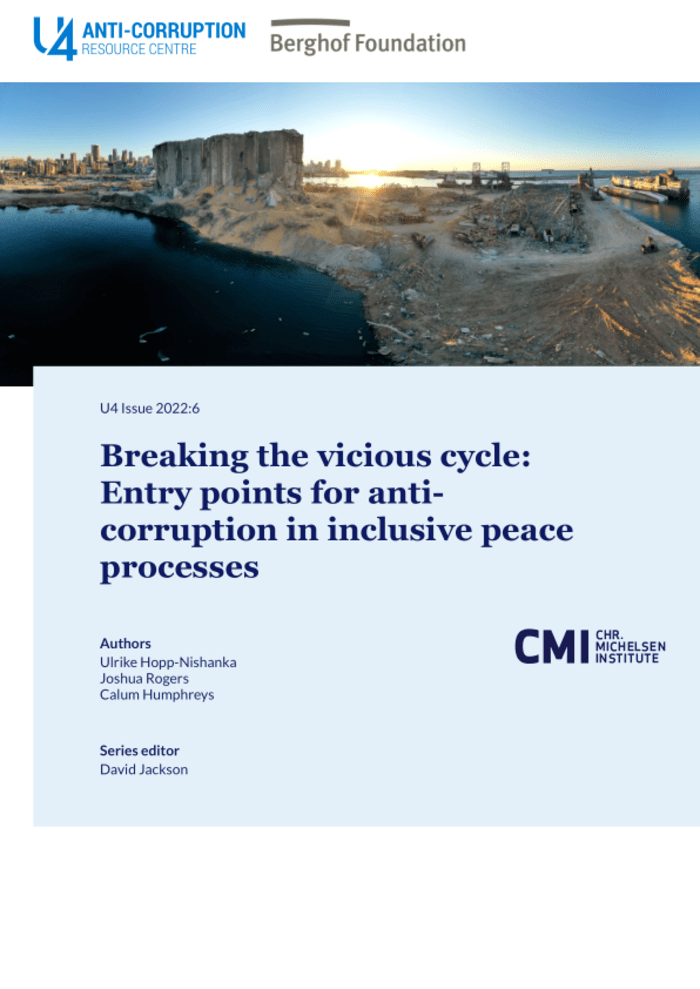 Anti-corruption practitioners and peacemakers must work together to ensure lasting peace.

Anti-corruption practitioners and peacebuilders rarely work together to secure lasting peace. Recent experiences in Afghanistan and elsewhere have (again) painfully revealed just how wrong a siled approach can be. A collaboration between U4 and the Berghof Foundation maps ways to sensitively integrate anti-corruption into conflict transformation processes.

Vicious circles… but no change in practices

Not surprising that lower levels of corruption are associated of a more lasting peace. Violent conflicts, in turn, often creates the right environment for fraud, corruption and embezzlement. From the Western Balkans to Iraq, Afghanistan and beyond, insufficient anti-corruption efforts have helped lead to post-conflict settlements threatened by instability, exclusion and exploitation.

In addition, mediators fear that the fight against corruption will undermine their delicate relationships with the main actors in a conflict. Anti-corruption practitioners, on the other hand, have not been very assertive from the start of peacebuilding processes, perhaps due to a tendency to favor technical solutions and away from negotiations. political peace.

The need for interaction and integration

U4 and the Berghof Foundation have teamed up to help practitioners move beyond the flawed division of labour, in which mediators first aim to reach a peace deal before anti-corruption actors begin to s take responsibility. We strongly advocate for more dialogue and interaction between the two communities of practice – and seek to determine how this can be done.

Fighting corruption in conflict contexts first means ‘do no harm’. Peacebuilding practitioners – including external actors and donors – need to recognize when they are Work in corruption and consider how their work affects corruption and how corruption affects their work. Ideally, they should also decide to work on corruption, finding ways to include anti-corruption in peace processes or broader peacebuilding support in ways that build accountability, integrity and inclusive governance.

Work in corruption and conflict

Working in the area of ​​corruption requires analyzing how specific power dynamics and political economy factors affect how corruption is organised, sustained and evolves over time. As perceptions of corruption can differ greatly, a multi-stakeholder perspective should inform any analysis. More importantly, it must be adapted to gender dynamics and where corruption perpetuates gender inequality, including through impunity and gender-based violence.

Such “corruption sensitivity” can help peacemakers deal with the most disruptive forms of corruption. For example, how demobilization and reintegration programs can be subverted by patronage networks inherited from the conflict, but also how ignoring clientelism and the social expectations surrounding it can derail the transition of armed groups to nonviolence. It should also identify how corruption can entrench grievances that threaten longer-term peace, such as leaders acting with apparent impunity or get-rich-quick schemes in a fledgling public administration.

Dealing with corruption also means developing principles of integrity that define how resources are provided to communities after conflict. These dialogues with local leaders, community groups and the international community should emphasize “downward responsibility”. This means that integrity guidelines are communicated directly to those affected by the interventions, rather than to international organizations or donors.

Donors may also wish nuance their zero-tolerance approach corruption, as this can contribute to a tendency to try to strategically ignore corruption risks, as any allegation can immediately halt activities and budgets. “Sufficient” approaches to due diligence could give local organizations more space to build their own safeguards and become more sensitive to corruption.

Work on corruption and conflict

The mapping identifies entry points for working on corruption with high-level national leaders, mid-level and regional leaders and influential actors, and with local communities (following Lederach’s three paths of mediation).

Working on corruption with political leaders should not imply a ‘big bang’, but a step-by-step approach: measures that are not too burdensome at the start, but which offer opportunities to build political ambition and technical sophistication over time. An important starting point would be to work with parties to conflict to include and develop an anti-corruption agenda in peace processes: basic principles, agreed mechanisms and future promises. The inclusion of women in such processes will make them less likely to fail and can help make more effective anti-corruption.

Such agendas could seek to satisfy the “enlightened self-interest” of the parties to the conflict: mechanisms such as public disclosure of government assets and officials can enhance the legitimacy of the peace talks. To this end, mediators and dialogue facilitators could benefit from better access to technical expertise on issues such as transparency and integrity in power-sharing agreements, management of natural resource revenues, post-war reconstruction and institution building.

Even so, practitioners supporting peace processes at the highest leadership level need to confront and be honest about the trade-offs between the inclusiveness of peace talks and pressures to exclude parties to conflict perceived as “too corrupt”. Better analysis and open discussions with anti-corruption actors can help navigate these trade-offs.

At the level below the national leadership, Peacebuilders can support anti-corruption efforts by lobbying for the inclusion of influential actors with an anti-corruption agenda – senior government officials, women’s organizations, regional leaders, journalists, charities, organizations faith-based organizations, self-help groups and other forms of civil society – in peace talks to create bottom-up pressure for stronger accountability and help set the agenda. To this end, create gender neutral spaces for dialogue is very important, as is the need to protect local change agents reprisals related to their anti-corruption activities.

At this level, peacebuilding and anti-corruption actors should try to accommodate each other’s concerns and pursue them with a more integrated approach. Transitional justice is just one area where this can apply – for example, monitoring procedures of the Truth, Justice and Reconciliation Commission of Kenya would have focused on identifying corrupt officials, in addition to tackling human rights abuses. Likewise, specialized ‘truth commissions on corruption’ could be a way to investigate and publicize past abuses by public and private actors.

Work at the community level, peacebuilders have begun to integrate social accountability interventions such as peace barometer initiative in Colombia, which is monitoring the 2016 peace agreement. Mechanisms like these can be a way to integrate the fight against corruption into peacebuilding, for example by including specific objectives of transparency and integrity in social audit. More generally, integrate anti-corruption social accountability toolssuch as participatory budgeting and citizen report cards, could strengthen peacebuilding programs.

Anti-corruption and peacebuilding share many commonalities, from their transformative agendas rooted in social justice to their conceptual focus on local agency and collective action. The proposals set out in this paper represent only the beginning of a more integrated dialogue. As the two communities of practice face new opportunities as well as new challenges, peer-to-peer exchanges, cross-fertilization of new ideas, and establishment of a common agenda with donors and other external actors – for further research and best practices – can help secure more sustainable forms of peace.

Pediatrician warns against baby formula recipes on the internet